FBMUD 48 is empowered, among other things, to purchase, construct, operate and maintain all works, improvements, facilities and plants necessary for the supply and distribution of water; the collection, transportation, and treatment of wastewater; and the control and diversion of storm water. FBMUD 48 may issue bonds and other forms of indebtedness to purchase or construct such facilities. FBMUD 48 is also authorized to develop parks and recreation facilities, including the issuance of bonds payable from taxes for such purposes, and may also, subject to the granting of road powers by the TCEQ and certain limitations, develop and finance roads. FBMUD 48 is also empowered to contract for or employ its own peace officers and to establish, operate, and maintain fire-fighting facilities, independently or with one or more districts.

The TCEQ exercises continuing supervisory jurisdiction over FBMUD 48. In order to obtain the consent for creation from the City of Missouri City (“City”), within whose corporate limits FBMUD 48 lies, FBMUD 48 is required to observe certain requirements of the City which: limit the purposes for which FBMUD 48 may sell bonds to the acquisition, construction and improvement of waterworks, wastewater, drainage and park and recreational facilities; limit the net effective interest rate on such bonds and other terms of such bonds; require approval by the City of District construction plans; and permit connections only to lots and commercial or multi-family reserves described in plats which have been approved by the Planning Commission of the City and recorded in the real property records. Construction and operation of FBMUD 48’s system is subject to the regulatory jurisdiction of additional governmental agencies.

FBMUD 48 contains approximately 660 acres of land. FBMUD 48 is located approximately 23 miles southwest of the central downtown business district of the City of Houston, five miles southwest of the central business district of the City and lies wholly within the corporate limits of the City and within the boundaries of the Fort Bend Independent School District. Access to FBMUD 48 is provided by Fort Bend Parkway Toll Road to Texas Highway 6 to Vicksburg Boulevard. 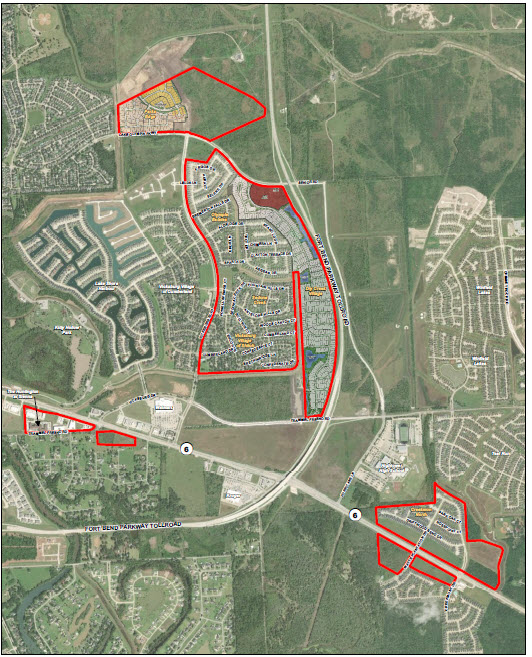 For persons with questions or needing help regarding website accessibility, or to request the provided information in alternative formats, please call (713) 237-1221.